“DAUGHTERS OF ROME” by Kate Quinn

Another title in the series by Kate Quinn, narrated superbly 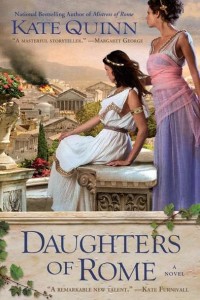 by Elizabeth Wiley.  Here’s the synopsis:

The Roman Empire is up for the taking. With bloodshed spilling out of the palace and into the streets of Rome, chaos has become the status quo. The Year of Four Emperors will change everything—especially the lives of two sisters with a very personal stake in the outcome….

Elegant and ambitious, Cornelia embodies the essence of the perfect Roman wife. She lives to one day see her loyal husband as Emperor. Her sister, Marcella, is more withdrawn, content to witness history rather than make it. Even so, Marcella has her share of distinguished suitors, from a cutthroat contender for the throne to a politician’s son who swears that someday he will be Emperor.

But when a bloody coup turns their world upside down, Cornelia and Marcella—along with their cousins, one a collector of husbands and lovers, the other a horse-mad beauty with no interest in romance—must maneuver carefully just to stay alive. As Cornelia tries to pick up the pieces of her shattered dreams, Marcella discovers a hidden talent for influencing the most powerful men in Rome. In the end, though, there can only be one Emperor … and one Empress.