IN PRODUCTION: “COME AS YOU ARE” by Emily Nagoski JUST COMPLETED: “Rivals of Versailles” by Sally Christie 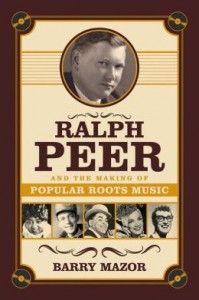 We had the honor to edit and master this wonderful book about Ralph Peer for Lyric Audiobooks and Blackstone Audio, narrated by music legends Marty Stuart, Ketch Secor, of the Grammy winning group Old Crow Medicine Show, along with Grammy-winning musician, Dom Flemons and author, Barry Mazor.

“This is the first biography of Ralph Peer, the adventurous—even revolutionary—A&R man and music publisher who changed the breadth and flavor of popular music in the United States and around the world. It is the story of the life and 50-year career of the man who was crucial in discovering star musicians and establishing the genres of blues, jazz, country, gospel, and Latin music. It tracks Peer’s role in such groundbreaking episodes as recording the record that sparked the blues craze, the first country recording sessions with Fiddlin’ John Carson, his discovery of Jimmie Rodgers and the Carter Family at the famed Bristol Sessions, the popularizing of Latin American music during World War II, and the postwar transformation of music on the airwaves that set the stage for the dominance of R&B, country, and rock music.”